skip to main | skip to sidebar

I can have a pain in my body for a long time before I notice it. I can have a song in my head for a long time before I hear it. I can feel under subtle pressure and tension for a long time before I notice. It seems I have to enter a space of sitting and watching, as if I were to climb up on a far away ledge to get a view of a valley, before I become aware of what is happening to me and significantly, what I've been doing to myself. Many many people are waging subtle energetic warfare on each other continually on account of jealousy and resentment, and sometimes it's we ourselves who are under our own attack. How do we separate from ourselves, from all our abusive auto-mechanisms, for long enough to notice some pervasive, subtle act of fear or aggression we're staging automatically.

While meditating I saw the living fossil of the toddler in me trying so hard to accomodate the expectations of others that she'd internalized those pressures habitually in order to protect herself from any devastating outside blows. In the water of the soul swim the creatures of truth. This is one I just became aware of, again. It's a slippery one and easily wriggles out of my awareness even when I try to hold onto it and study it's dynamism. Which I'd only do if I prevent it from getting buried in the valley of the avalanches of novelties, distractions, self-consciousness and habitual hurry scurry.

In meditation I became aware that my husband and I can be much better friends. Soul friends. We have to scope the landscape of our shadows better and borrow each other's eyes from time to time to view the things we're doing to ourselves and what we do to each other. If we enter the water's of our own and each other's souls and swim.
Posted by amarilla at 9:43 AM 10 comments: 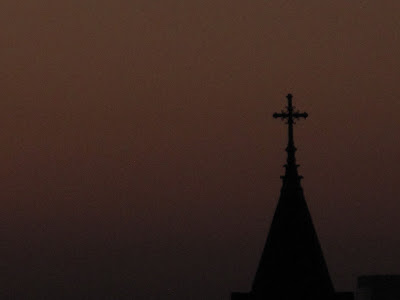 Today I feel I am wrestling with reality /the angel/ every second. Every second I see some way I'd like to edit what is, and a second later wonder what exactly reality wants, and find that I have space for it to be as it is and curiosity about where it is going, on its own, without being checked by my neurosis and hangups.

Yesterday was a day for me to learn about humility, humility in the face of reality, to start to see all the automatic screening devices with which I keep reality /and myself/ at bay. Raw reality, what does it want?

I was thinking about Jesus and his suffering. He had to find space in himself for all he endured. He became a master of space. And Padmasambhava, burned at the stake 3 times, must have gotten to know fire very well.

And me, I notice that I run from myself every minute, unable to control all that I feel I should be able to change in myself and in the world, unable to live up to my standards. There's so many Atlases like me paralyzed in some degree by the weight of our grandiosity, always running, running away from the reality of ourselves and our helplessness. It makes you hornery.
Posted by amarilla at 6:52 AM No comments:

Space is the ground of everything, the fundamental reality. We generally think of earth as representing groundedness, and it does as long as we believe ourselves to be one thing separate from everything else. In duality, earth is the ground, space is the absence of ground. But in Dzogchen, space is the ground. The practitioner merged with space is more grounded than earth because he or she is the space in which earth exists; is more comfortable than water because space has no obstructions; is more flexible than air because air can go no place that space is not already; is more creative than fire because space gives rise to fire. Space is what we truly are. 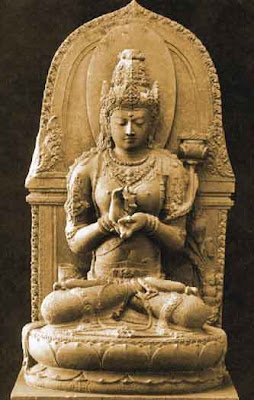 The statue of Prajnaparamita has a strong symmetry which draws one's mind to the center, her hands are posed in the dharma wheel mudra and her face appears in such absorption that I wonder where here mind has gone. The mudra draws my mind to the central point, where the thumb and index finger appear to hold something incredibly small and precious. What is that tiny thing?

In my meditation last night I tried to hold this thing. It appeared to me as a tiny spinning bead filled with light, shimmering a blue light. A pearl, perhaps, embedded with endless dakini script. It hangs there spinning the past to the future to the present and around again, like the Gaykil hangs inside the Dharmacackra, a tiny seed of spontaneous arising the emanates dharma, heart work, bodhichitta. Is it the atom and its components, the nucleus, ever reconfiguring and creating matrices of life? Is it the nuclear burst that lies within?
Posted by amarilla at 5:43 AM No comments:

Shinay, or non-meditation is discussed in this blog post. Instead of trying to focus our minds on a particular object or practice, Yongey Mingyur Rinpoche suggests we stay relaxed and present to whatever floats into our awareness. Is that easy?

What's not discussed is that in order to do this practice one must relinquish control of experience and emotion, relax the floodgates clenched to keep insecurity at bay. Often when one starts to relax control over what's allowed into the mind one (theoretically) opens to the difficult emotions and memories we suppress, push to the margins of consciousness. In order to hang on to the horse of Shinay, everything has to be OK, the darkness, the sadness, the despair, the hopelessness, greed, the insecurity and its causes, all that is true within the consistency of our being.

Sitting passively, insecurity arises, tugs at our minds, and we do nothing about it. How is that possible? With the foundation that these thought forms that push us one way or antoher and their contents have no reality. They are shadows, clouds, presumptions, superimpositions. When all that arises within our minds becomes cloudlike and empty, these dynamics loose their power. This is the practice of relaxation; not just to relax the jaw, shoulders, eyes, spine, wrists but to relax the very mind that grasps at phenomena as reality, having understood the ignorance that causes appearances to be mistaken for actualities. When the body becomes a temple fortified with the understanding of mind-as-projector, one can truly relax into softness, a softness that contains within it pure potential and sky-like spaciousness.
Posted by amarilla at 10:38 AM No comments:

I dreamed of clouds that boiled and swirled in intricate forms like foam on a cauldron; The clouds seemed to come alive. At that time, when I looked up and lost myself in the clouds, I sometimes saw the merlin that lives around here. My son and I were looking for shapes in the clouds and then I saw it.
Posted by amarilla at 2:46 PM No comments:

In many mystical traditions it is accepted that as one individual cleanses her mind of resentment, hostilities and attachments, all other minds benefit and show a similar ripening. That's how it seems to me right now, and while I was just meditating and in this period of doing the work of developing a heart dedicated to compassion.

MR, speaking about Buddha Shakyamuni the other day, mentioned that some believe when a Buddha gains enlightenment, all beings simultaneoius follow suit. So why aren't we all enlightned then, he asked. He didn't answer this question. Well, perhaps we're more enlightened than we would have been otherwise. As for me, I found it curious when, walking down Prospect Park West, I was suddenly delighted that there are 6.77 billion people on earth. 6.77 billion flames to light my heart up. This is rather a large shift from my former (hopefully) mindset in which the enormous human population makes me want to scream about resource depletion and the ravaging of the earth.

Look how desire has changed in you,
how light and colorless it is.

with the world growing new marvels
because of your changing. Your soul

has become an invisible bee. We
don't see it working, but there's

the full honeycomb! Your body's height,
six feet or so, but your soul rises

through nine levels of sky. A barrel
corked with earth and a raw wooden

spile keeps the oldest vieyard's wine
inside. When I see you, it is not so

much you physical form, but the company
of two riders, you pure-fire devotion

and your love for the one who teaches you;
then the sun and moon on foot behind those.
Posted by amarilla at 7:54 AM 46 comments: